All About Value Rules: Bid Adjustments for Smart Bidding in Google Ads

Not all clicks are created equal — some are more likely to convert than others. In the days of manual CPC bidding this meant that PPC specialists had to adjust bids to account for these differences in expected conversion rates. They might have set geo bid adjustments to bid more in Germany and less in Switzerland or to bid higher on mobile devices than on desktops.

Let’s see how Value Rules, the shiny new toy from Google Ads, works to restore bid adjustments for automated bids and, most importantly, how to use this new tool correctly for optimal results.

You can now adjust conversion values based on characteristics like location, device, and audience to help optimize your campaigns!

Value Rules were announced at Google Marketing Live 2019 and finally came out of beta in late summer of 2021. Value Rules let advertisers create rules to adjust conversion values whereas bid adjustments simply adjust CPCs. So how then are Value Rules a replacement for bid adjustments you might ask.

Remember that smart bidding automatically sets the appropriate CPC bid every time a search is done for your ad. This real-time bid is based on the expected value the click may produce and the advertiser’s target return on ad spend (tROAS).

For the same auction, now with a Value Rule:

As you can see, a Value Rule that doubles the value reported for a conversion is effectively the same as creating a bid adjustment of 2x.

Don’t use Value Rules the same way as bid adjustments

Now here’s the important thing. While you could use Value Rules as a straight-up replacement for bid adjustments, you should NOT because you’d be doubling up on what Google’s automated bidding is already doing for you.

Remember bid adjustments are way to manipulate bids when you’re doing the bidding process manually so let’s review that manual process for a minute. First, how are CPC bids typically derived? Say you expect 10% of clicks to fill out your lead gen form, and each form fill is worth $100 to your business, then your CPC bid would be $10 (0.10 * $100).

Now here’s the rub… With smart bidding, Google already knows this difference in expected conversion rate so it will already set a $12 bid. This is true because the data you used to decide a 20% bid adjustment is the exact same data Google already gets from you when you use conversion tracking.

The bottom line is that creating a Value Rule to adjust bids based on expected conversion rates will simply stack bid adjustments and get you to bid incorrectly. So please don’t.

Remember, Google removed Broad Match Modified keywords because 95% of advertisers were using it wrong and getting results that weren’t intended. Let’s not go down that same path.

How to use Value Rules to optimize PPC campaigns

Value Rules are tremendously useful as a form of bid adjustments for smart bidding if you use the right data to create your rules.

A good rule will be based on something you haven’t told Google.

It turns out that there’s a lot advertisers know about their business that they’re not communicating to Google through the conversion tracking pixel, seasonality adjustments or different targets.

Let’s go back to our example with German customers. While we already told Google they convert 20% better than typical, what happens after the conversion? Do they typically have a higher lifetime value? Or do these conversions result in more store visits because you have more stores per capita in Germany than in other places?

How to use Value Rules

Value Rules are set at the account level. The rules can be based on location (physical or location of interest), device, or audience.

For audience, advertisers can choose between who the user is, what they’re interested in, what they’re actively searching or planning, and how they’ve interacted with your business. 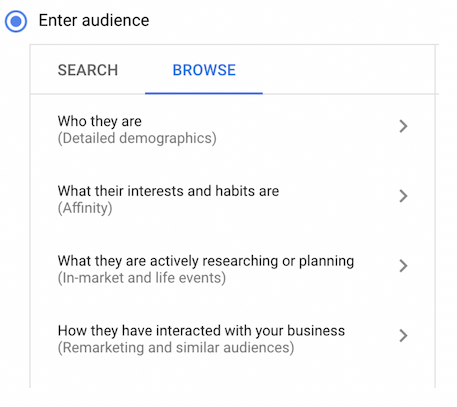 Rules can be based on just one of the three types of segments, or combinations of up to two segments. Once advertisers pick the types for their first rule, all other rules must use the same two segment types. For example, if the first rule combines location and audience type, then all following rules must also use location and audience and it won’t be possible to create rules using device types.

There is a nice preview of rules, and the ‘If x, Then y’ methodology should already be very familiar to Optmyzr users of our very powerful PPC Rule Engine.

The action of a rule is to manipulate the reported conversion value by incrementing it by a set amount or multiplying it by a certain factor.

The resulting rules will look something like this in Google.

As I’ve explained before, Value Rules are a less precise way to communicate conversion quality to Google than alternatives such as offline conversion tracking or value adjustments. But they are much simpler to use than the alternatives so they’re a great next step for advertisers who previously haven’t optimized their accounts by optimizing how they report conversions.

Optmyzr will have an innovative new approach to creating Value Rules very soon, so drop our support team a line if you’d like to be one of the first to test it out.

Google’s Value Rules are a great feature for advertisers who want more control over automated bidding but who don’t want to set up the more complex offline conversions or value adjustment systems.

We got several questions related to this feature so here’s a roundup of the most popular ones. We’ll continue to amend this post as new information about Value Rules becomes available.

Yes, the ‘conversion value’ column will show adjusted values throughout your entire account for search, shopping, and display campaigns.

This means that if you send reports to your boss or client with conversion values, these values will be ‘incorrect’ after enabling value rules. How you define ‘correct’ is up to you but there will be a change in how values are calculated and this could create issues with reporting.

We recommend having a conversation with your stakeholders before enabling value rules. Alternatively, you can use automated reporting tools like those offered by Optmyzr, to use value rules to improve bidding (using adjusted conversion values).

Values start being adjusted from the moment you create your value rules. Previously reported values will not be changed.

How can I see my original conversion values?

To see the unadjusted conversion values, in other words, the conversion value as if you had no value rules, enable the segment “Conversions → Value Rule Adjustment” on the account or campaign overview page. 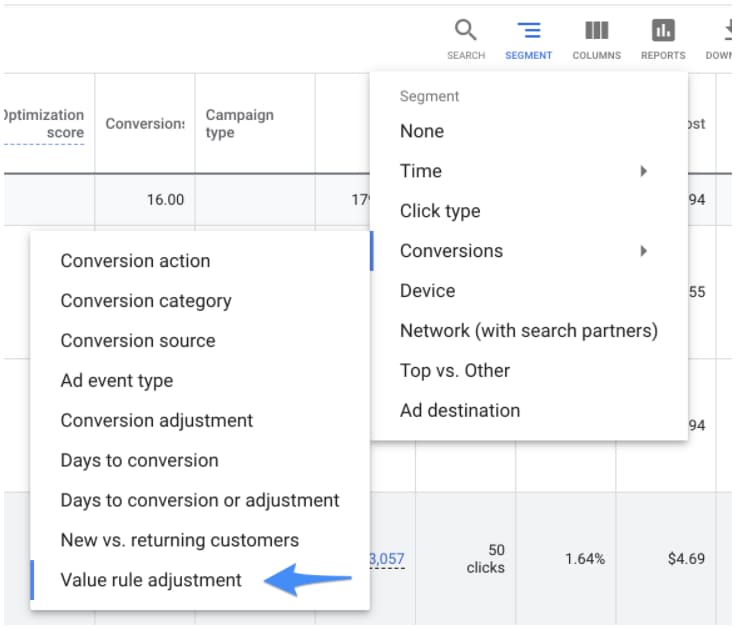 After doing this, you’ll see a new segment for “original value (no rule applied) for any account or campaign that has a non-zero conversion value.

If a conversion satisfies multiple value rules, which one is used?

Amy Bishop explained this really well in her post about value rules. This is the order in which rules are applied:

Is there really a 1:1 relationship between a bid adjustment and a value rule?

Nice article Fred, thanks. I'm wondering though, is the conversion modifier and bid modifier confirmed by Google to be a 1:1 relationship? I'm a bit doubtful about that.
-->"By doubling the conversion value in the example above, you will end up setting double the CPC."

This is a great question from Mike Ryan who really knows the details of PPC. And he’s right that setting a value rule is not necessarily the exact equivalent of setting a bid adjustment.

Here’s why: Value rules change the value of a conversion that is reported to Google. Google’s machine learning algorithms then use these self-reported conversion values to predict the probable value of future conversions.

But remember Google considers over 500,000 signals from each auction to make this prediction.

Can value rules be set for tCPA campaigns?

Can value rules be set for CPA campaigns? 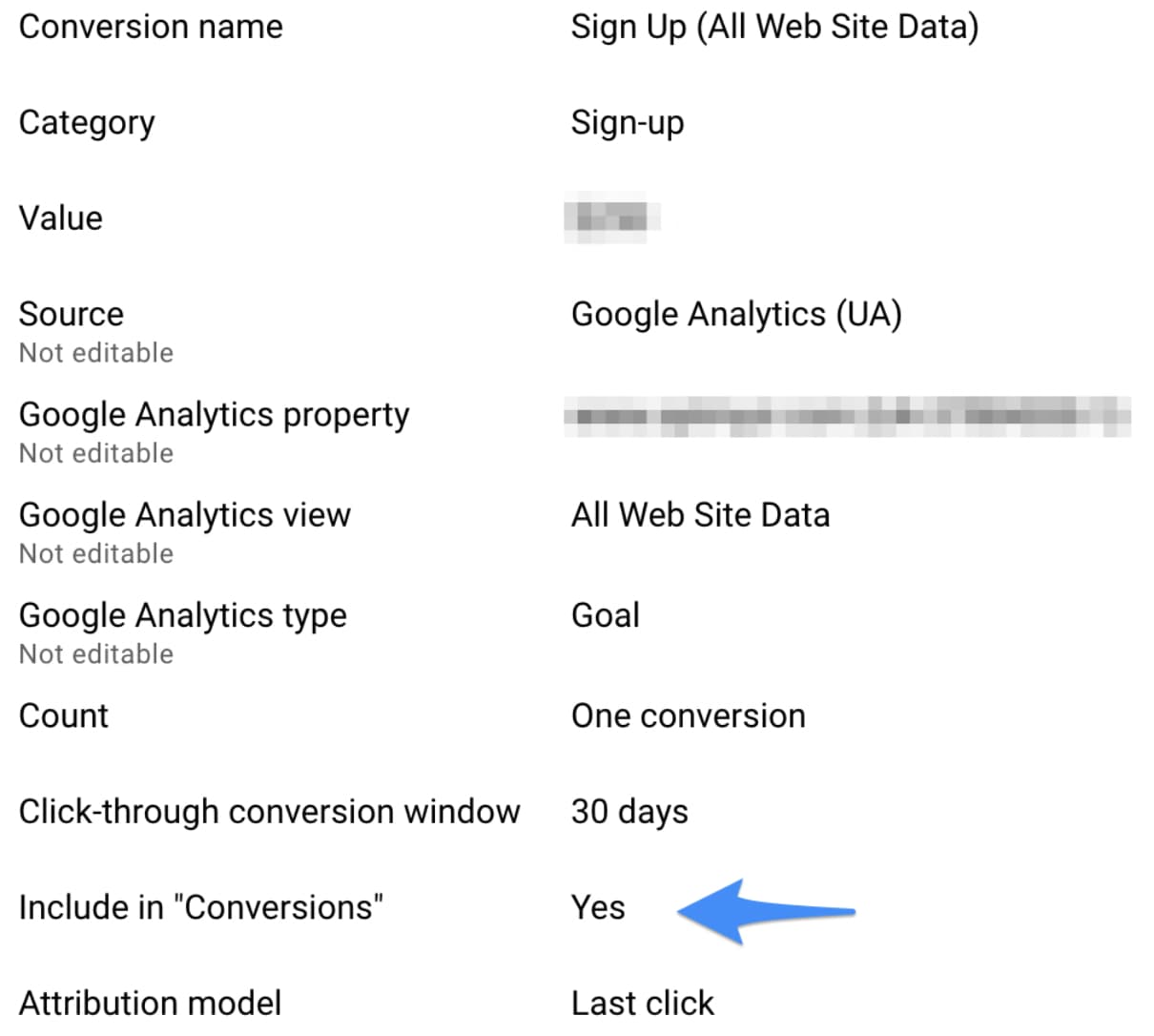 What is the range of allowed adjustments?

A rule can change the original value of a conversion by a factor ranging from 0.5x to 10x. Alternatively, advertisers can choose to add a static value to a conversion that meets the conditions of the rule.

It seems a bit counter-intuitive, but there really are things every advertiser knows that Google doesn’t – like …

Bid automation is one of the biggest potential time-savers in PPC.

A couple of weeks ago, Google’s developer blog carried a hidden announcement: Google Ads is going to retire their Target …

If you’ve ever used the Smart Shopping feature in Google Ads, you know how easy and quick it makes e-commerce.

May 15, 2022 Bid Management Google Ads
Which Bid Adjustments Work With My Bid Strategy on Google Ads?

Updated: May 16, 2022 Google has a tremendous amount of data about how people interact with ads and the computing power …