Some PPC tools simply slap a different UI on existing capabilities from the engines but at Optmyzr, we try hard to build functionality that doesn’t simply repackage what’s already available for free. Our focus is on making it really easy to do some things that would take a lot of time to do in the AdWords interface or the AdWords Editor.

So one way to find ‘expensive’ keywords is to look for ones whose average costs are much higher than for other keywords in the same campaign.

You could try an Automated Rule, but as you can see in the screenshot, the metrics we have access to in AdWords Automated Rules are those from the entity we’re acting on. So if we’re trying to pause expensive keywords, we can only use keyword data to make that determination and we don’t have access to campaign data for that keyword.

Then consider that you might want to change your definition of ‘expensive’ over time. The first few times you run this analysis you might look for big outliers, say keywords that are at least twice the expected cost. But as you run the rule more frequently, you may want to include keywords that are just 30% more expensive. This means you need to be able to write an equation to do the analysis. Automated Rules have no formula builders, you can only do simple comparisons.

Since an Automated Rule won’t work, what about just using the AdWords interface? You could certainly do it and the process would look roughly as follows:

It’s doable but unless you can automate this, you probably won’t do it as often as you’d like.

I personally once did an optimization that took 27 separate reports: a combination of different lookback windows, different levels of the account, and some extra reports to get conversions broken down by type.

We built the Rule Engine because we never want you to have to go through the pain I went through to do this monster of an optimization. Here’s what building a rule looks like: 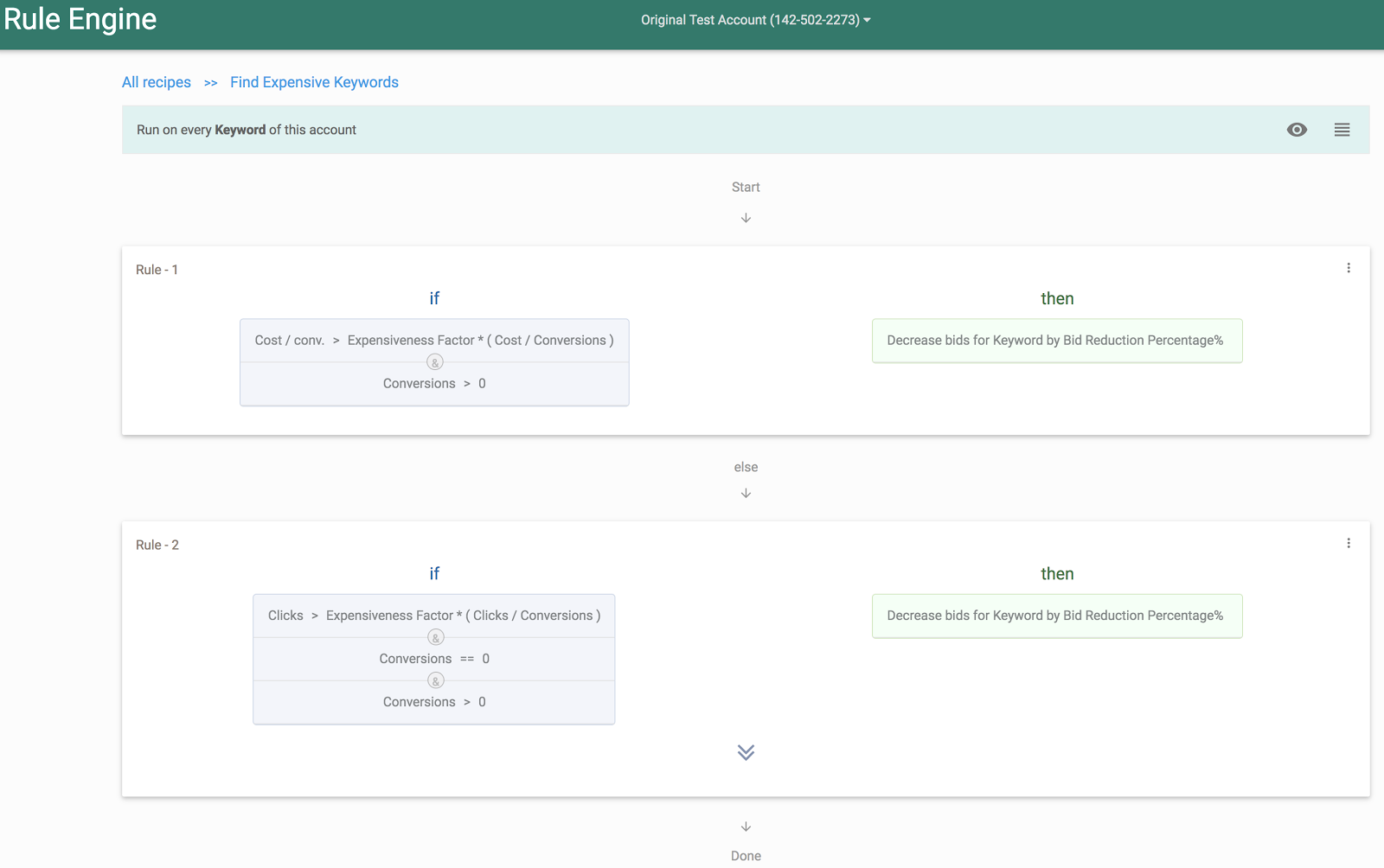 What the screenshot shows is the finished rule. We’ve already prebuilt this as a recipe so anyone can copy it into their account in seconds. But if you want to modify it or write a rule from scratch, that’s easy too. Here’s what our screen for editing a condition looks like:

Simply click on one side of the equation and pick a metric or write a custom formula. You can choose whether the metric is for the keyword, its parent ad group or campaign, or the account. You can also choose if the metrics should be for just one segment, like a particular device type.

More optimizations that are much easier in Optmyzr

Here are a few more optimizations that are really easy in Optmyzr compared to doing them in AdWords:

There’s so much more you can do with the Rule Engine so hopefully I’ve given you a taste of its power and you’ll start to experiment with it for your own optimizations. I’d love to hear how you have used the Rule Engine to do an amazing optimization in a fraction of the time it would have taken in AdWords.

And if you don’t have access to the Rule Engine (a Pro-plan feature), contact our support team so we can set you up with a free trial.

Change isn’t always easy in PPC but, as Sarah Stemen writes, when each of us start looking at new ways to become the …

May 20, 2021 PPC Automation Google Ads
How to Add GCLID Data to Google Analytics

PPC marketers are always optimizing — some monitoring here, an adjustment there, and then you start to see (better) …

We all have repetitive PPC management tasks we wish we could automate and get off our daily to-do lists.