Advertisers have a slew of best practices to choose from when optimizing their PPC accounts. But why are some of the best strategies so rarely implemented?

The reality is that implementing Offline Conversion Imports is hard. But Google has now made it easier, so we’ll explain exactly how it works and why it’s important.

You’ve likely heard that tracking offline conversions is a good way to optimize your PPC campaigns. Let’s look at an example to explain this.

Say you generate leads for solar panel contractors and collect the names of prospects through a form on your landing page. When the lead comes in, your sales team calls the homeowner to schedule a free estimate. Later, some of the estimates are accepted and leads become paying customers.

In a conversion-focused optimization strategy without Offline Conversion Imports, all leads look the same because every prospect started by filling out the lead form on your landing page and that’s the only thing that is reported as a conversion.

What happens after that may be clear in your CRM, but Google Ads has no information about this. So when Google’s automated bidding strategies (like Maximize Conversion Value) are turned on, it thinks all leads are equally valuable and hence bids the same $10 for every prospect.

As illustrated in the graphic above, three prospects took different actions and should get different values. The lead who never got an estimate is valued lowest; the lead who received a free estimate but did nothing with it is given a higher value; and the lead who went from estimate to buyer gets an even higher value.

These values can be communicated to Google through Offline Conversion Imports. With this additional insight, the Maximize Conversion Value bid strategy can now prioritize the more valuable leads by bidding more for them.

It should be fairly obvious to most marketers that Offline Conversion Imports is a key strategy for advertisers who want to up their game and increase the value they get from PPC by upgrading from conversion-focused to value-based optimization.

But it’s not always adopted because it’s historically been difficult to implement.

The reason for this is simple. Advertisers are used to being able to control most elements of their campaigns through self-service tools provided by Google Ads, third-party PPC optimization software like Optmyzr, and landing page tools like Instapage.

But those same marketers usually don’t control the CRM systems where this valuable offline conversion data lives inside their organization. This dependency on other business teams (and sometimes even engineering) significantly reduces the adoption of Offline Conversion Imports.

The way Offline Conversion Imports works is by capturing every user’s unique click ID (GCLID) and adding it to the lead form. From there, the GCLID lives with the customer record in a CRM. When a lead moves through the conversion funnel, marketers can communicate these events to Google by passing back conversion actions and their corresponding unique GCLID. 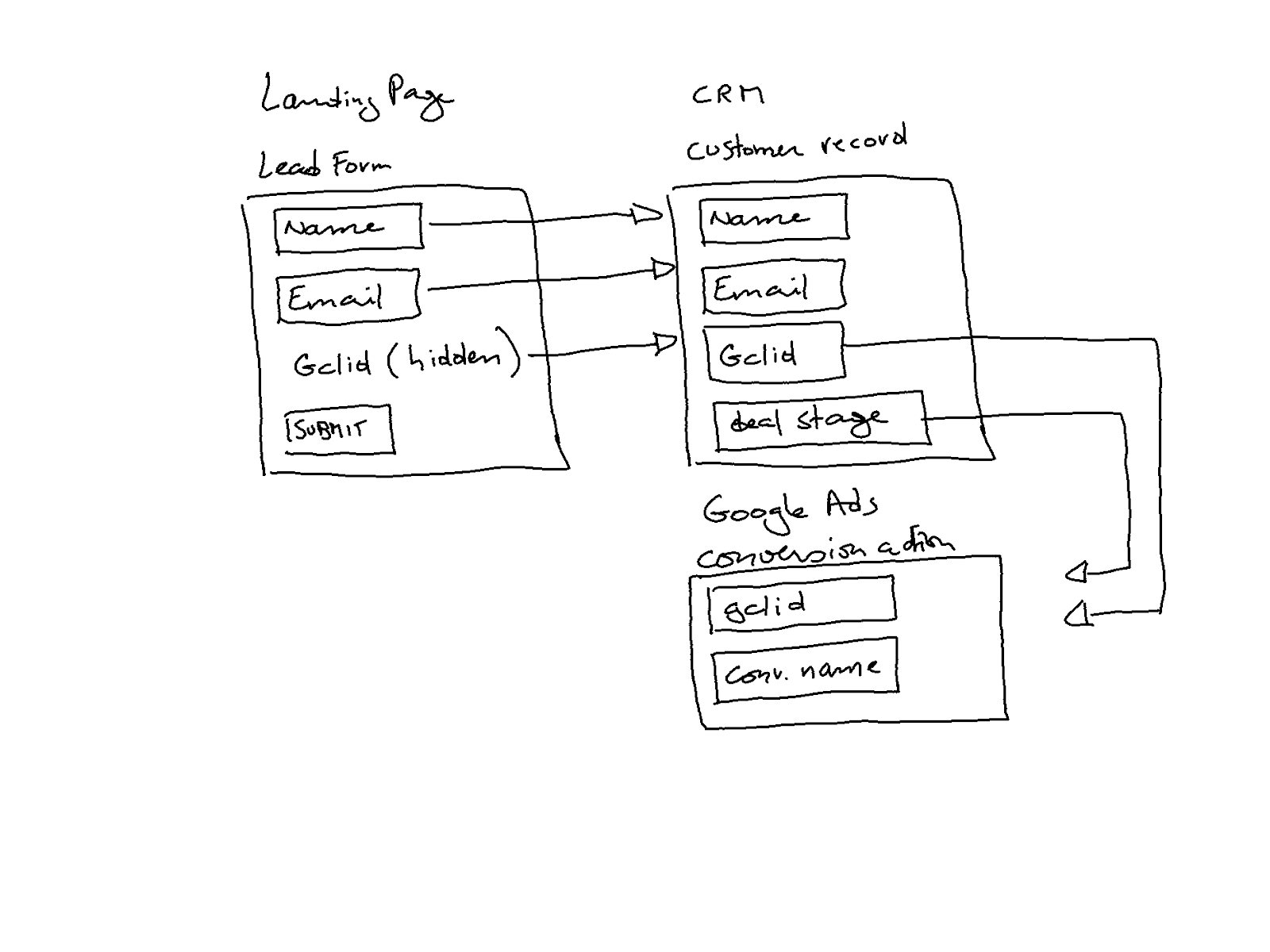 It’s the GCLID that bridges the advertiser’s CRM data to Google’s data about each click that came from an ad auction.

But getting the GCLID into and out of the CRM can be a Herculean task in some organizations. Simply because control over implementation is out of the hands of the marketing team, it too often doesn’t get implemented right – or at all.

How To Do Offline Conversion Imports Without GCLIDs

Google now offers Enhanced Conversions for Leads, and without much fanfare solved one of these biggest challenges lead generation marketers have had with implementing Offline Conversion Imports.

While it still requires the unique GCLID, it now only has to be integrated with the lead form and no longer with the CRM. This is a major improvement that simplifies implementation.

Let’s look at how it works.

As the illustration shows, the advertiser gets to use a unique piece of customer information of their own to connect a Google click with different conversion stages in their CRM. And what better piece of unique lead data than someone’s email? It’s nearly always the first thing a lead form asks, so nearly every advertiser has it available.

Now the advertiser doesn’t need to remember the GCLID of each prospect in their CRM. They just tell Google which email address is associated with the GCLID (hashed for privacy) when the form is first filled out. From that point forward, they can just use the email address to tell Google a lead took the next step towards the ultimate conversion.

It’s a beautiful solution, really. Advertisers simply update the conversion tracking code on their landing page (which they likely already control and don’t need engineering’s help with), then use the existing email field from their CRM to tell Google when a lead turns into something more, like a customer.

Optimization decisions are almost always based on data. When Optmyzr recommends a negative keyword, bid adjustment, or A/B ad test winner, it’s based on conversion data.

The better the conversion data available to platforms like Optmyzr or ad engines like Google, the better those tools can recommend optimizations that improve the performance of the KPIs you truly care about.

With Enhanced Conversions for Leads (or any form of Offline Conversion Imports), these tools get better data that aligns more closely with business objectives, and will offer better suggestions to improve your PPC campaigns.

So if you’ve not yet tried Offline Conversion Imports because it was too difficult to implement, now is a great time to try it again. Here’s a panel discussion with Google from last year going a bit deeper into offline conversions.

Account management is a necessary task that all PPC managers have to perform on a regular basis.

Jul 27, 2022 Strategy Guest post
Agile Target Layering: What It Is and How It Helps Maximize Your PPC Profits

Has the world of PPC as we knew it come to an end?

At the height of the Roman Empire, pepper was so highly prized that spice traders’ wealth grew faster than they could …