If you were hoping 2021 would be a hard reset on last year’s paid search woes, we don’t blame you for feeling like you’re living out the movie Groundhog Day.

Yesterday, Google announced that it will soon phase out Broad Match Modified keywords and change how Phrase Match functions. We know it’s frustrating to lose options on top of having search query data withheld, but this particular change isn’t necessarily as bad as it appears to be.

Here’s what you need to know about the change, how to manage the transition, and how Optmyzr can help you manage new keyword match types.

What are broad match modified keywords?

Modified Broad Match is a variation of the Broad Match keyword type that Google introduced in 2010 to address complaints from advertisers that Broad Match was sometimes taking too many liberties with the searches it would show ads for.

One example I remember from my time at Google was trying to explain to an advertiser why we’d shown their ad targeting the keyword ‘Britney Spears posters’ — I worked at Google a really long time ago — for a search for ‘Britney Spears’.

When you sell posters, dropping the core word ‘posters’ from the keyword understandably makes a big difference. Google understood this and wanted to fix it.

But they didn’t want to change Broad Match, because they have long made the point (and continue making it today) that 15% of all searches are unique. They say advertisers need a low-effort way to capture the potential of these hard-to-guess searches. That’s why Broad Match keywords — and more recently ‘close variants’ — are useful to help advertisers show ads for all relevant queries, even the 15% that are new all the time.

So with Broad Match continuing to have relevancy problems, advertisers (especially those with advanced knowledge or more complex accounts) started shying away from Broad Match in favor of Exact Match keywords.

Their argument: the risk of showing for irrelevant broad variations outweighed the benefit of the additional traffic. This undesirable trade-off did in fact exist in the days before auction time bid automation (called Smart Bidding by Google), but it’s much less of an issue today.

To understand that, I’ll repeat what I’ve said before and what can lead to a healthy debate: there is no such thing as a bad keyword, only bad bids.

The idea is that advertisers shouldn’t care what queries their ads are shown for, so long as they get clicks at a price that makes sense considering the likely conversion rates and sales per click. Advertisers want business growth; they want profits. Nobody truly cares about keywords. Smart Bidding takes care of this by setting a profitable bid for any query, no matter how weird.

(This statement assumes that advertisers correctly report conversions, which is far from a given.)

But before Smart Bidding helped alleviate some of the concerns of advertisers, Google decided to launch a hack to their match types. So they introduced a quasi-match type called Broad Match Modified (BMM). The API reports from Google don’t make reference to BMM as a match type; it’s called a Broad Match and happens to contain some ‘+’ symbols — it’s not an official match type, only a hack.

To combat showing ads for irrelevant queries while still allowing for extra traffic from closely related searches, Google said advertisers could specify the words in the keyword that were absolutely critical by adding a ‘+’ in front of those.

So for example, an advertiser selling video games but only for Xbox could target a keyword like ‘video games for +xbox’. That way, their ad might show for searches like ‘xbox games’ but not for ‘nintendo games’.

How Advertisers use Broad Match Modified

In Optmyzr’s analysis of 162 million positive keywords on February 5, 2021, we found the following about how advertisers use Phrase Match and Broad Match Modified keywords.

• 55% of advertisers who use broad match modified always put a plus in front of every term in their BMM queries, i.e. +video +games +for +xbox

• 95% of all broad match modified keywords have a plus in front of every term of the keyword. So only 5% of keywords are more selective about plussing words like this ‘video games for +xbox’.

Why Modified Broad Match didn’t live up to expectations

TL;DR: Broad Match Modified was not used by most advertisers in the way it was intended.

Instead of adding a plus sign before just the critical words in the keyword phrase, many advertisers simply plussed every word. So keywords looked like ‘+video +games +for +xbox’ rather than ‘video games for +xbox’.

This worked just fine, but it basically told Google that all those words had to be in the search, very similar to a Phrase or Exact Match.

With this way of using Broad Match Modified, advertisers had a more restrictive match type than outright Broad Match (where any word might be changed or dropped), but less restrictive than Phrase Match (where all words have to be present in the exact order, but can have additional ones before and after it).

Here’s an example of how keyword match types work, using ‘vacations in San Francisco’ as the baseline: 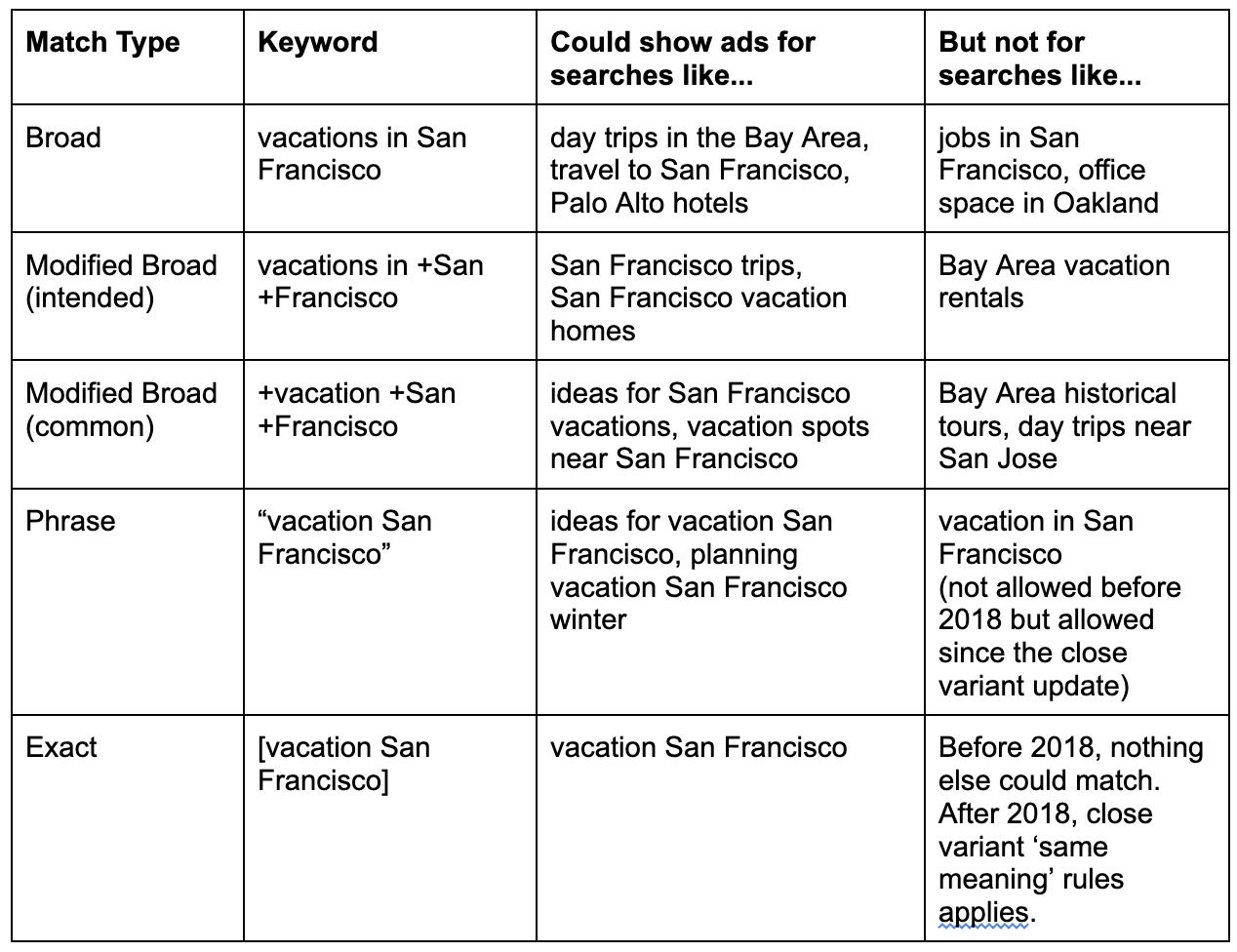 One caveat is that since Broad Match Modified was introduced, Google has seriously loosened their matching rules.

For example, in 2018 they announced that Phrase Match could also trigger ads even if the keywords are closely related e.g. as a typo, pluralization, stemming, or by the addition of articles like ‘in’, ‘of’, etc.

Later that year, they made Exact Match no longer exact by introducing ‘same meaning’ Close Variant matches, something Optmyzr has some great tools to help you troubleshoot and undo, that you can test for 2 weeks with our fully-functional free trial. 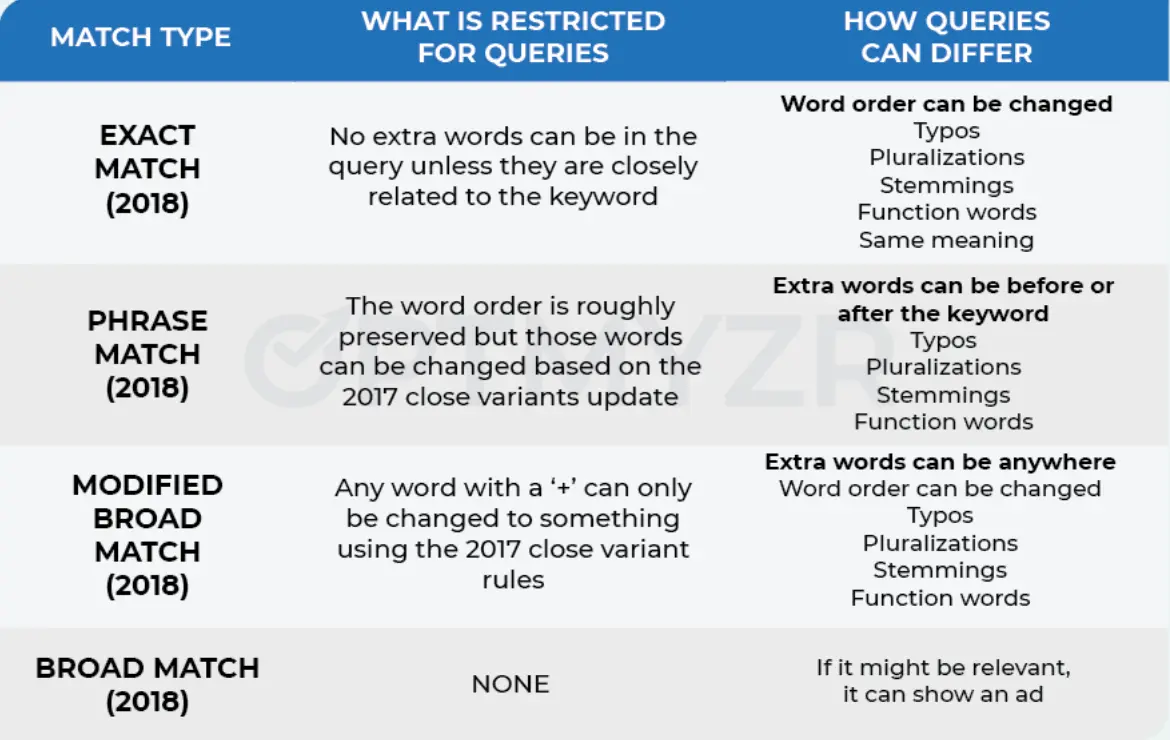 Since those changes, the key difference between Broad Match Modified and Phrase has been that Phrase is more stringent on the word order being roughly the same. Otherwise, there is little that separates the two.

How Phrase Match is changing now

Starting in February 2021, Phrase Match is absorbing Modified Broad Match — let’s call it Updated Phrase Match (2021). Phrase Match’s preference to have the words from the query appear in roughly the same order as in the keyword will remain. But rather than only allowing Close Variant matches, there may now be many more words added in between — and not necessarily articles like ‘in’ or ‘to’.

Are advertisers losing anything with this change?

With this update to Google Ads, advertisers who selectively ‘plussed’ words in Broad Match Modified are losing a more aggressive approach to gaining additional ad traffic. This is because any non-plussed words were previously treated as a Broad Match, and therefore allowed Google’s algorithms the most aggressive permissions to change them.

Now that advertisers have to use Phrase Match with no option for Broad Match Modified, the algorithm will become more conservative in showing ads for related searches. Advertisers who want more aggressive query expansion can still use Broad Match keywords.

As you can see in the following table, Updated Phrase Match (2021) is supposed to be more restrictive than Broad Match Modified where not every word is plussed. I’ve highlighted the same words and when they may or may no longer trigger an ad.

Google also points out in their post on the Google Ads API blog that advertisers with Phrase Match will see traffic increase and those with Broad Match Modified should expect a decrease in traffic.

What should advertisers do about the updated Phrase Match?

There are a lot of caveats to all of our explanations.

For example, Google says that the word order will be maintained when it makes a difference to the meaning. So for a keyword like ‘book trip’, the order should be preserved because ‘trip book’ means something else (‘book’ went from being a verb to a noun, and ‘trip’ from a product to a descriptor).

But ‘San Francisco vacation’ may very well be turned into ‘vacation San Francisco’ because it still means roughly the same thing.

So what does Google’s algorithm think the meaning is? As is so often the case with the way automation is taking over in PPC, machine learning gets to decide if ‘San Francisco vacation’ means roughly the same as ‘vacation San Francisco’ even though the word order is changed.

Google should get it right most of the time but it introduces a new uncertainty for advertisers, especially when that flip of sequence changes the meaning entirely (like ‘milk chocolate’ and ‘chocolate milk’).

If you’re an advertiser in a smaller language market, the algorithms are notoriously worse, simply because they’ve been trained on less data. But even in big markets, the machine may still get it wrong, so advertisers need to monitor things.

The good news is that you can identify issues by simply continuing to monitor search terms reports to find instances of poor matches and add any necessary negative keywords (which Google says will not change in behavior at this time).

How to monitor the keyword match type changes in Optmyzr

In response to Google’s announcement, we have added 3 new capabilities to the Optmyzr Rule Engine to help advertisers monitor how keywords are mapped to search terms. They are highlighted orange in the screenshot.

Now when evaluating a search term, it can be compared to the keyword that triggered it and the Rule Engine will tell you if the words are exactly the same, if the word order is the same, and how similar the query is to the keyword.

Using these calculated attributes, it becomes easy to find search terms that are very different from the triggering keyword. Or to find instances where the word order of a phrase match has been altered.