Keyword match types have long existed as a way for advertisers on Google and Bing to define how closely a user’s query has to match a keyword before it can trigger an ad to show.

Match types allow advertisers to either tightly control exactly what searches their ads may appear for (through exact match keywords) or to give a lot of control to Google’s Machine Learning to decide when the ad might be relevant to a search, even if it doesn’t contain any of the words in the keyword (through broad match keywords).

Because Google says that approximately 15% of searches that happen every day are unique (i.e. that same query has not been seen in the past 90 days), they believe that advertisers who restrict their keywords too much will miss out on a lot of relevant traffic. Their point is valid.

At the same time, broad match has a reputation for sometimes being a bit too quick to show ads and causing irrelevant clicks and that has led some advertisers to stop using broad match all together. While they’re more in control, they miss significant opportunities, and Google is missing the opportunity to monetize.

So Google started to look for a solution and in 2014 they introduced the notion of ‘close variants’. In a 2017 update, ‘close variants’ were updated and by then could encompass plurals, singulars, misspellings, stemmings, or the addition or removal of function words.

In the most recent 2018 update, close variants were again redefined and they can now behave in one of 2 ways depending on the match type:

For any positive keyword type, except ‘exact’, a close variant can be:

For exact match keywords, close variants can be all the above PLUS one more:

Think of a close variant as the ability for Google to take any string of words in your keyword and replace it with one of the variations described above. If that new keyword is eligible to show an ad in the match type chosen by the advertiser, the keyword will enter the ad auction.

There is one further change that is worth noting. The word order in exact match keywords used to matter. In the 2017 close variant update, the word order for exact matches could be changed.

Because match types are more complicated to understand due to the existence of close variants, we’ve created a table to explain how match types work as of the launch of the October 2018 close variant update. 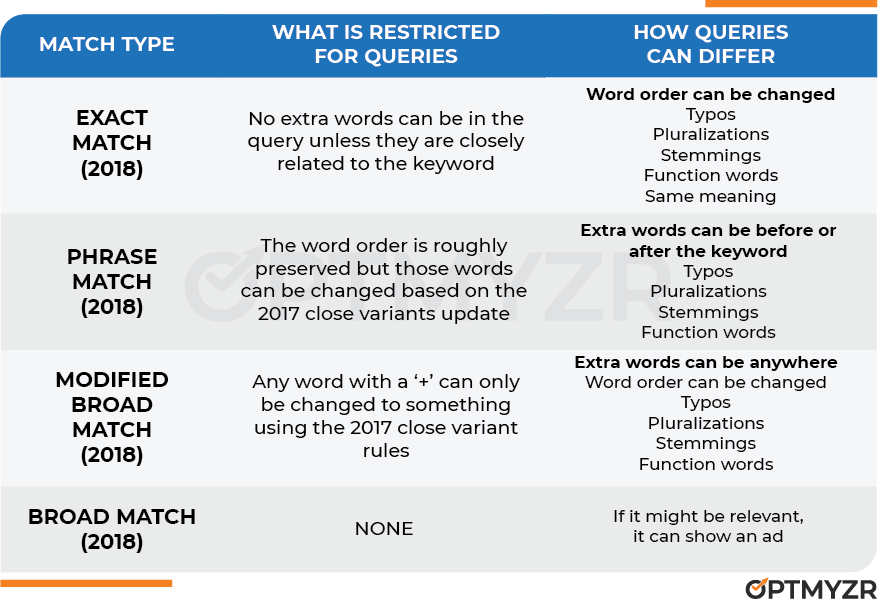 We’ve also created a free AdWords Script that will help you do an analysis of how close variants are impacting your account. Simply copy-and-paste this into a single account’s AdWords Scripts section and run it to get a Google Sheet showing how your keywords have been changed by close variants.

Get the script here:

Watch our instruction video on how to use the script:

Subscribers of Optmyzr can also try our Predefined Recipe in the Rule Engine called “Close Variant Performance for Exact Match Keywords” to get a similar report. This predefined recipe can easily be updated to automatically add negative keywords if the query proves to be significantly underperforming the underlying keyword.